Note: To ensure the best performance, please use an antenna that supports frequency bands used by the Quectel BC95-G module.

It comes in the package which also includes the mikroSDK software and a library with all the functions. The NB IoT Click Board™ comes as a fully tested and approved prototype, making it a reliable device ready to use on the development board.

The NB IoT Click Board™ is equipped with the BC95-G module from Quectel Wireless Solutions, which supports LTE NB1 technology, developed with IoT applications in mind. It supports several NB frequency bands: B1, B3, B5, B8, B20, and B28. The module supports point-to-point MO and MT messages, widely used for M2M communication. Packed with the set of protocols that allow data and SMS transfer using the NB1 technology and the ultra-low power consumption makes this module a perfect choice when it comes to building IoT applications. 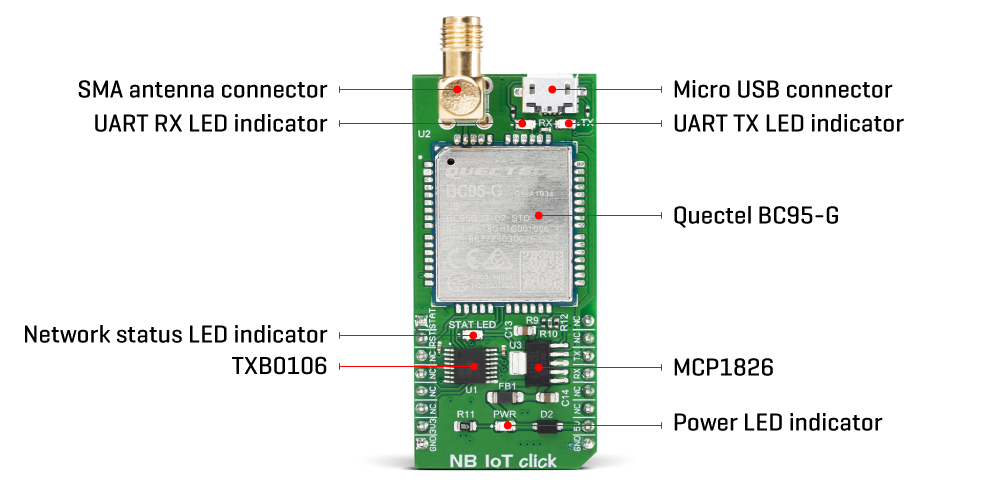 The Quectel BC95 module has to be powered by a clean and stable power supply. The voltage needed for the module to work properly is 4V and it is derived from the 5V mikroBUS™ rail, through the MCP1826, a 1A low drop output (LDO) regulator from Microchip. Although the Quectel BC95 module is an ultra-low power device, its power consumption can briefly peak sometimes, so 1A LDO had to be used.

The BC95 module does not have a dedicated USB interface, therefore a USB-to-UART circuit had to be added to the NB IoT click to provide USB to UART conversion. The FT230X, a highly integrated USB-UART bridge solution from FTDI is used, offering very simple integration thanks to its compact size and a small number of external components required. Two LEDs are used to signalize the data traffic through this IC: the red LED labelled as TX indicates the UART transmission, while the yellow LED labelled as RX indicates the UART reception.

This Click board™ is equipped with the micro USB connector. It allows the module to be powered and configured by a personal computer. Quectel Wireless Solutions Company offers a software suite which can be used to configure the BC95 module. However, the FT230X IC requires drivers in order to work. FTDI offers drivers for all major OSes on their official driver download web page. Also, Windows OS drivers are included in the download section, below.

The micro SIM card holder on the back of the NB IoT Click Board™ is used to install the SIM card. This device cannot be used without a valid SIM card which allows connection to the cellular network.

Digital sections of the BC95 module are supplied with power by an integrated LDO regulator, so it is necessary to convert the logic voltage level of the microcontroller (MCU) communication lines. By utilizing the LDO output (routed through the MOSFET switching circuitry), the needed reference voltage is provided for one side of the TXB0106, a 6bit bi-directional logic voltage level converter. The reference voltage for the other side of the TXB0106 is taken from the 3.3V power rail of the mikroBUS™. The small switching circuitry composed of a few signal-level MOSFETs is used to provide a way to switch off the FT230X when the Click board™ is inserted into the mikroBUS™ socket. This allows uninterrupted communication with the host MCU.

The STAT pin is used to signalize the status of the device. This pin is routed both to the mikroBUS™ AN pin through the TXB0106 level translator, and the yellow LED labelled STAT, which is used to visually indicate the device status. The network status is indicated by the TXD LED, using the following pattern:

The module can be reset by pulling the RST pin of the mikroBUS™ pin to a LOW logic level. This pin is pulled up to a HIGH level by an internal pull-up resistor. Besides the hardware reset, the module can also be reset by using the AT command. More information about the available AT commands can be found in the download section, below. However, the NB IoT Click Board™ comes supported by the mikroSDK library. The library contains functions which simplify the software development, integrating several AT commands into a single function call. Using mikroSDK makes the code way more readable, but more importantly - easily portable.

This table shows how the pinout on NB IoT Click corresponds to the pinout on the mikroBUS™ socket (the latter shown in the two middle columns).

We provide a library for the NB IoT Click Board™ on our LibStock page, as well as a demo application (example), developed using MikroElektronika compilers. The demo can run on all the main MikroElektronika development boards.

The Library carries generic command parser adopted for AT command based modules.

All additional functions such as timer initialization and default handler.

The NB IoT Click Board™ is supported with mikroSDK - MikroElektronika Software Development Kit. To ensure proper operation of mikroSDK compliant click board demo applications, mikroSDK should be downloaded from the LibStock and installed for the compiler you are using.