The LED Driver 3 Click Board™ is an RGB LED driver, capable of driving RGB LEDs with up to 30mA per segment, via the digital I2C interface. It comes with an RGB LED on-board, and is capable of displaying a palette of 32768 colours. It features an integrated circuit with three independent LED driver sections and a programmable gradual dimming control, which gives a smooth dimming effect. Heat dissipation is taken to the minimum, due to a fact that the used driver IC works with up to 94% efficiency.

The LED Driver 3 Click Board™ is an RGB LED driver, capable of driving RGB LEDs with up to 30mA per segment, via the digital I2C interface. It comes with an RGB LED onboard, and is capable of displaying a palette of 32768 colors. It features an integrated circuit with three independent LED driver sections and a programmable gradual dimming control, which gives a smooth dimming effect. Heat dissipation is taken to the minimum, due to a fact that the used driver IC works with up to 94% efficiency.

The LED Driver 3 Click Board™ can be used in a range of different applications: color backlight displays, backlit computer keyboards and mice, color-coded signalization, and in many decorative colored lighting applications, which can be controlled by an MCU.

The main component of the LED Driver 3 Click Board™ is the NCP5623B, a triple output RGB LED driver, controlled through the I2C protocol, from ON Semiconductors. This IC is equipped with an internal DC/DC converter, that works as a high-efficiency charge pump, providing the required DC voltage for all three LED segments. The current flow through each LED segment is regulated by an internal current mirror, associated with each of the channels. 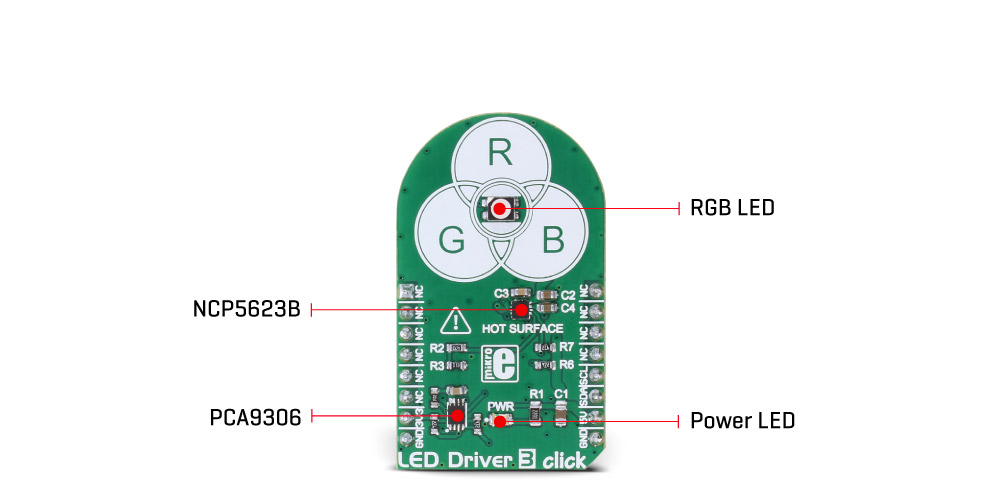 The gradual dimming function allows an easy way of dimming RGB LED intensity. With a simple I2C command, it is possible to trigger either upward or downward dimming. Dimming will affect the current through the LED segments, but the internal current limiter takes care not to exceed the maximum allowed current, set by the onboard resistor.

The integrated PWM operates with five bits, having 32 steps to cover the full modulation (0 to 100%) of the associated LED channel. Having a value of 0x00h will turn the associated LED completely OFF, while 0x1Fh will set the LED to a programmed LED current value. The last three bits (MSB) are used to set the desired command register: PWM1, PWM2, PWM3, dimming direction, gradual dimming, LED current, etc. It should be noted that the gradual dimming function affects the illumination by changing the LED current intensity, while PWM affects the associated LED illumination by changing the pulse width - e.g. it is possible to set the desired color by setting the PWM modulation of each color component, and then gradually dim the brightness of the final color mix up or down by the gradual dimming option - affecting the current through all the LED segments simultaneously. It is also possible to set the fixed value for the current through the LED segments via the I2C interface, when gradual dimming is not needed.

More information about the registers and their usage can be found in the NCP5623B datasheet. However, the provided click library offers easy to use functions for setting up the RGB color of the LED and utilizing the smooth gradient functions. The included example application demonstrates the functionality and usage of these libraries. The example can be used as a reference for custom projects.

The LED Driver 3 Click Board™ is also equipped with an RGB LED. This is a high brightness RGB LED with a wide viewing angle, that can get very hot and bright while operated with maximum current. For this reason, a care must be taken not to touch it or watch directly at the LED.

SCL1 and SDA1 lines from the I2C level shifter are routed to the standard mikroBUS™ I2C pins, labeled as SCL and SDA. The click board™ already contains pull-up resistors, so no additional parts are needed to work with the click board.

The library carries functions necessary to have complete control over all functionalities of the LED Driver 3 Click Board™.

The LED Driver 3 Click Board™ is supported with mikroSDK - MikroElektronika Software Development Kit. To ensure proper operation of mikroSDK compliant click board demo applications, mikroSDK should be downloaded from the LibStock and installed for the compiler you are using.