The Radiation Click Board™ based on the BG51 radiation sensor from Teviso Sensor Technologies. The function of the BG51 radiation sensor is based on an array of customized PIN diodes. The performance of the Radiation Click Board™ with solid state sensor, in combination with high immunity to electrostatic fields make it a good choice for new state-of-the-art designs as well as for upgrading existing designs of detecting beta and gamma radiation and X-rays.

The Radiation Click Board™ is supported by a mikroSDK compliant library, which includes functions that simplify software development. This Click Board™ comes as a fully tested product, ready to be used on a system equipped with the mikroBUS™ socket.

The Radiation Click Board™ detects beta and gamma radiation and X-rays by using PIN diode inside BG51 as sensor. A PIN diode is a diode with a wide region of intrinsic semiconductor material (undoped) contained between a p-type semiconductor and an n-type semiconductor. The advantage of a PIN diode is that the depletion region exists almost completely within the intrinsic region, which has a constant width (or almost constant) regardless of disturbances applied to the diode.

Interaction of radiation beta, gama, and X-rays with the p-i-n diode structure generates a dark current in diode junction due to the charge carriers generation. This is detected by electronic circuit as the dark current peaks and interrupt is reported on INT pin of mikroBUS™ and indicator LED/BUZZER . 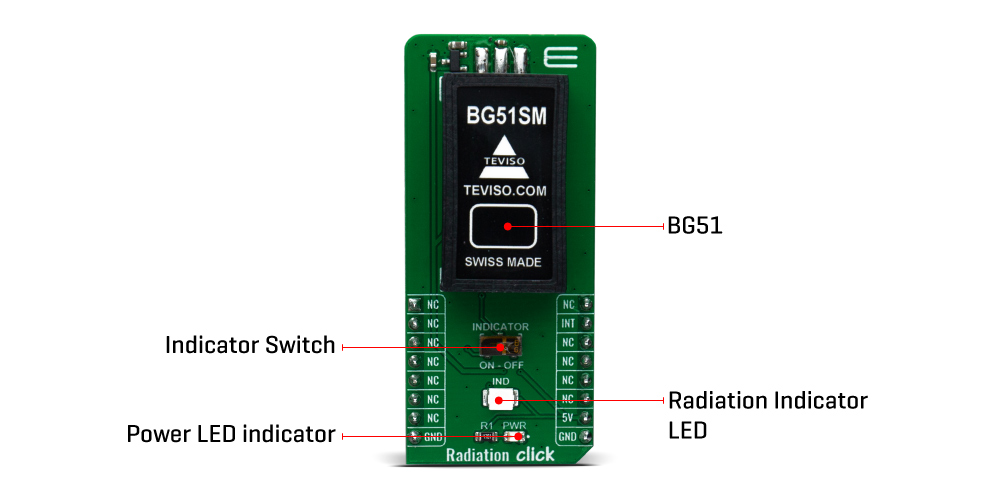 In a heuristic sense, nuclear radiation is the effluence from a nuclear radiation source that consists of energy in the form of particles or waves. The waves are represented as photons or quanta of radiant energy. A radiation detector may be exposed to neutrons (particles), gamma rays, X-rays, or other radiation energy. The radiation can vary in energy density, wavelength, and duration.

There are two types of detected radiation readout: counts or radiation dose. The counts display is the simplest and is the number of ionizing events detected displayed either as a count rate, such as "counts per minute" or "counts per second", or as a total number of counts over a set time period (an integrated total). The counts readout is normally used when alpha or beta particles are being detected. More complex to achieve is a display of radiation dose rate, displayed in a unit such as the sievert which is normally used for measuring gamma or X-ray dose rates. 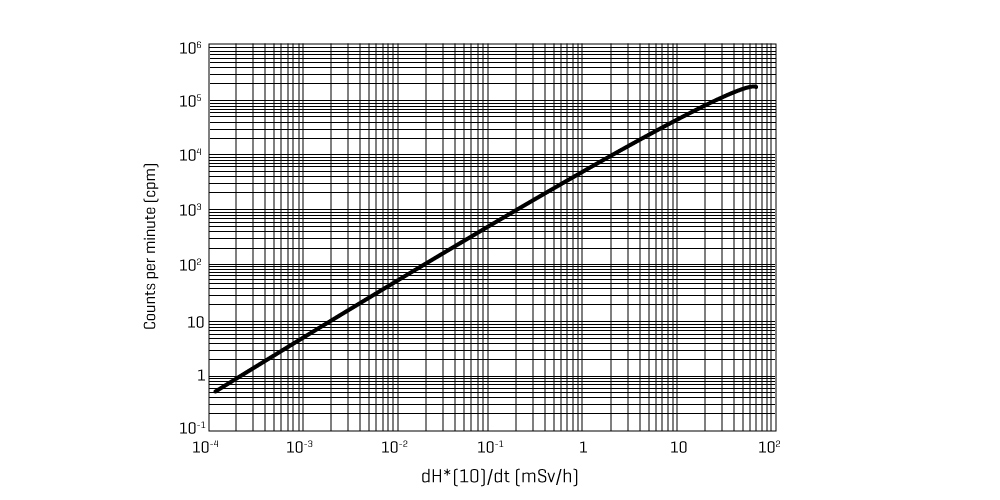 There is an option to produce audible clicks representing the number of ionization events detected. This is the distinctive sound normally associated with handheld or portable Geiger counters. The purpose of this is to allow the user to concentrate on manipulation of the instrument whilst retaining auditory feedback on the radiation rate.

This table shows how the pinout of the Radiation Click Board™ corresponds to the pinout on the mikroBUS™ socket (the latter shown in the two middle columns).

We provide a library for the Radiation Click Board™ on our LibStock page, as well as a demo application (example), developed using MikroElektronika compilers. The demo can run on all the main MikroElektronika development boards.

The library contains a reading of the state on the interrupt pin. Calculates the number of interruptions in one minute (cpm).

The Radiation Click Board™ is supported with mikroSDK - MikroElektronika Software Development Kit. To ensure proper operation of mikroSDK compliant Click board™ demo applications, mikroSDK should be downloaded from the LibStock and installed for the compiler you are using.