The Smart DOF Click Board™ features a highly advanced integrated system-in-package (SiP) solution with three different sensors on-chip: triaxial accelerometer, magnetometer, and triaxial gyroscope are all integrated on the same die, along with the powerful 32-bit ARM® Cortex®-M0+ MCU. Thanks to the integrated MCU, the BN080 SiP provides extensive signal processing. This allows many features to be implemented, including the MotionEngine™ support. The MotionEngine™ software allows extensive data modes and events detection. The BNO080 also supports the dynamic calibration of the sensors for temperature and aging, offering ultimate accuracy and reliability.

Built to be used as a simple solution, this 9 DOF SiP provides an output which can be used directly, with no tedious conversions required. Acting as a co-processor, it reduces the workload from the host MCU, allowing it to be used for other tasks, such as handling of the interrupt requests. Despite its complexity, BN080 SiP still reduces the overall power consumption, allowing various "always-on" features which can be used to wake up the host MCU and the rest of the system. Thanks to its many features, the Smart DOF Click Board™ can be used for the development of various motion-based applications, including VR/AR applications, robotics, VR/AR headsets, wearable motion controllers, and similar.

The Smart DOF Click Board™ is based on the BNO080, a System in The package (SiP) that integrates a triaxial accelerometer, triaxial gyroscope, magnetometer and a 32-bit ARM® Cortex®-M0+ MCU, produced by Hillcrest Labs. The integrated MCU core runs the proprietary Hillcrest SH-2 firmware, which includes the support for the MotionEngine™ software and its sophisticated signal processing algorithms. Thanks to this, the SmartDOF can provide very accurate and precise 3D acceleration, magnetic, and angular velocity data, in real-time. The additional output modes include orientation outputs by combining data from various sensors. There are many different rotation vectors available on a top of other readings, including geomagnetic rotation vector (does not use the gyroscope sensor), game rotation vector (no magnetometer), etc. The datasheet of the BNO080 offers a full list of outputs, each with a detailed explanation. 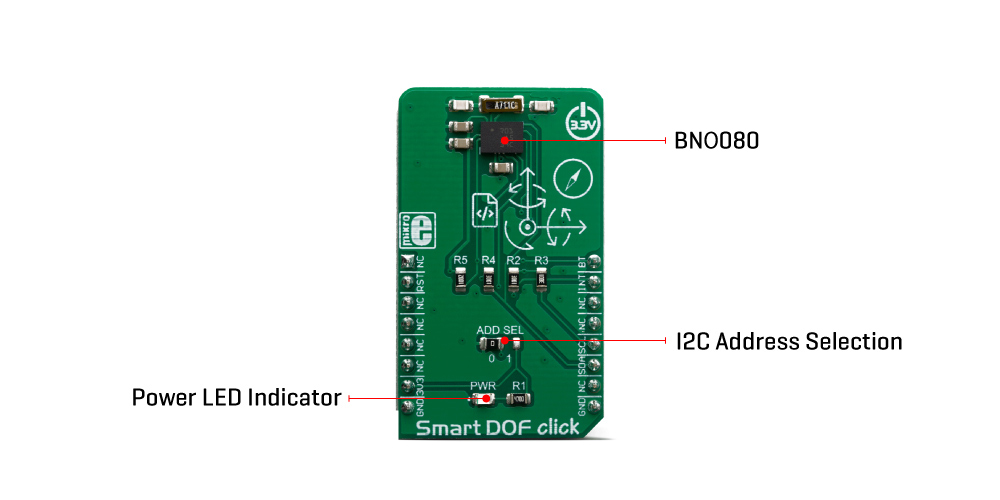 The detection engine allows many different events to be detected and reported as an interrupt, including tap detector, step detector, step counter, shake detector, etc. Both classification and detection systems use configurable thresholds. More information about how to set them up can be found in the SH-2 Reference Manual. However, the mikroSDK compatible library offers a well-documented set of functions, for simplified firmware development.

Besides the compensation parameters, the user is able to tare the device, using two tare modes: tare around all axes, or tare around the z-axis. The result of a tare operation is applied wherever power is applied to the device. The tare value can be permanently stored with the Persist Tare function.

The BNO080 will be started in the Bootloader mode. This mode allows updating the embedded firmware over the I2C interface. When this pin is pulled to a LOW logic level, the device will boot up in the Bootloader mode after the next restart. This pin is routed to the mikroBUS™ PWM pin and it is labelled as BT. The BNO080 datasheet describes the firmware update process in more details.

The Smart DOF Click Board™ uses the I2C interface to communicate with the host MCU. It has an SMD jumper labelled as ADD SEL, which can be used to select the slave I2C address. This allows more than one device on a single I2C bus.

The Smart DOF Click Board™ is designed to work with 3.3V only. When using it with MCUs that use 5V levels for their communication, a proper level translation circuit should be used.

This table shows how the pinout of the Smart DOF Click Board™ corresponds to the pinout on the mikroBUS™ socket (the latter shown in the two middle columns).

We provide a library for the Smart DOF Click Board™ on our LibStock page, as well as a demo application (example), developed using MikroElektronika compilers. The demo can run on all the main MikroElektronika development boards.

The Smart DOF Click Board™is supported with mikroSDK - MikroElektronika Software Development Kit. To ensure proper operation of mikroSDK compliant click board demo applications, mikroSDK should be downloaded from the LibStock and installed for the compiler you are using.