The physical layer is implemented by using a separate IC, which provides increased robustness, required for the automotive applications. It features three operating modes, remote wake-up via the CAN, and offers ideally passive behavior on the CAN bus when it is powered off. These features allow the MCP2518D Click Board™ to be used for the development of a wide range of automotive diagnostic applications, even on MCUs that do not natively support CAN interface.

The MCP2518D Click Board™ consists of a transceiver IC, a low-level physical layer IC (PHY) which provides a physical connection with the CAN bus itself, and a CAN controller IC, which is used as an interface between the MCU and the PHY IC. The MCP2518D Click Board™ uses the ATA6563, a high-speed CAN transceiver with Standby mode, and the MCP2518FD, CAN FD controller with the SPI interface, both ICs by Microchip. 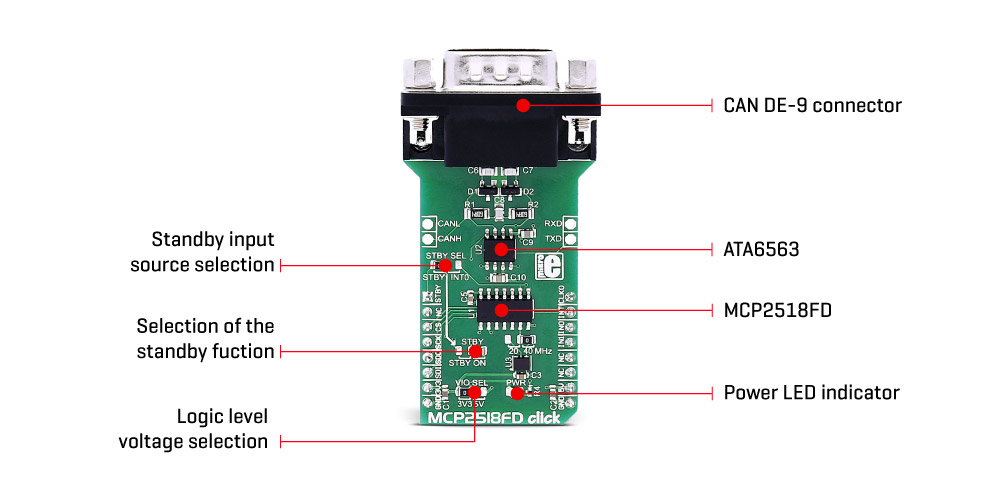 The role of the CAN bus controller is to provide arbitration, message framing, message validation, error detection, message filtering, and so on. Among all other tasks - it is used to provide clearly formatted CAN data for the application layer, running on the host MCU. 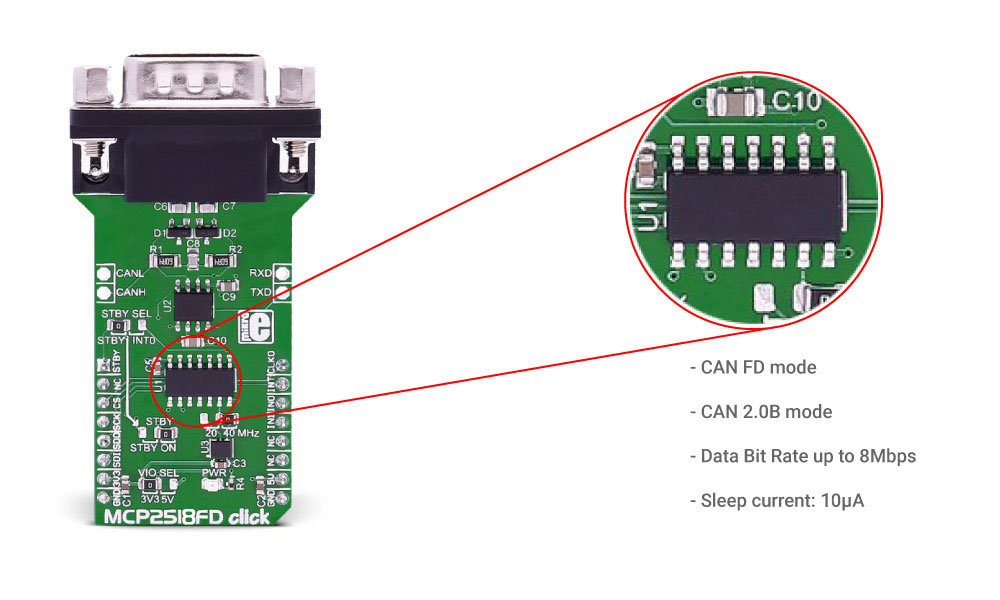 As the physical layer (PHY) IC, the ATA6563, a high-speed CAN transceiver with Standby mode, by Microchip. This IC provides the physical connection with the CAN bus and as such, it provides high resistance to electrostatic discharge and other electromagnetic phenomena, with its bus pins protected against transients, often encountered in the automotive environment. It allows communication speed up to 5Mbps. For the CAN bus device, it is important not to block the entire bus by permanently setting itself as the dominant node. For this reason, the PHY IC has the TX time-out function. It is also important to have defined bus pin states of nodes at all times. The ATA6563 PHY IC has its functional behavior predictive under all supply conditions. The ATA6563 is powered directly from the mikroBUS™ 5V power rail. This IC can work in several modes:

Normal mode is engaged when the STBY pin is at the logic LOW level, while the TXD pin is held to a HIGH logic level. While in the Normal mode, bus biasing is set to half the supply voltage, and the data can be transmitted and received via the CANH and CANL bus lines.

If the STBY pin of the ATA6563 is set to a HIGH logic level, the PHY IC will enter the Standby mode. While in Standby mode, the device is not able to transmit or correctly receive any data. The internal TX and HSC (high-speed comparator) sections are turned off, reducing the power consumption. Also, the bus lines are biased to the GND level. While in Standby mode, the device actively listens to the CAN bus traffic, looking for a valid wake-up pattern.

Since the STBY pin directly controls the operating mode of the PHY IC, it is routed to the onboard SMD jumper labeled as the STBY, allowing more than one way of control. This SMD jumper allows choice between connecting the STBY pin to the GND directly (LOW logic level), or allowing it to be controlled via the source selected by yet another SMD jumper, labeled as STBY SEL: control via the AN pin of the mikroBUS™, or the INT0/GPIO pin of the CAN control module IC.

The MCP2518FD, CAN FD controller with the SPI interface, also by Microchip, is used to control and shape the CAN bus data traffic. While the PHY IC provides CAN communication on a basic - physical level, the MCP2518FD takes care of all the communication and data formatting. It manages the proper decoding and encoding of messages, data arbitration, message transmission prioritizing and filtering, provides the FIFO buffer for the messages, and so on. This IC can even provide a clock source to the host MCU, reducing the number of needed components to a minimum. On one end, it uses the SPI to communicate with the host MCU, while on the other end, it uses RXCAN and TXCAN pins to communicate with the PHY layer IC. The MCP2518FD supports CAN frames in classic format (CAN2.0B), as well as the CAN Flexible Data Rate format (CAN FD), as specified in ISO11898-1:2015.

CAN FD controller IC contains 2K of integrated RAM, which is used as the message buffer. Besides this, it also contains a number of SFR registers, used to configure and operate the controller IC, including the configuration of the INT/GPIO pins, their direction and polarity, configuration of the clock section, operating mode (including the Low Power mode for the MCP2518FD IC), FIFO control and message filtering, and so on. All the registers are 32bit wide. The datasheet of the MCP2518FD IC can be consulted for a comprehensive list of all the SFR registers and their functions. However, the provided library contains functions which can be used with MikroElektronika compilers. The included example application demonstrates the use of these functions, and it can be used as a reference for custom development.

There are three interrupt pins routed to the mikroBUS™: INT, INT0, and INT1, pins of the MCP2518FD IC are routed to the INT, TX and RX pins, respectively. While the INT pin is always an interrupt output pin, used to alert the MCU of the interrupt event that is enabled and has its flag bit activated, INT0 and INT1 pins are used to alert the MCU about the RX and TX events (if these interrupts are enabled), or as the GPIO pins. INT0 pin is also routed to the onboard SMD jumper labeled as STBY SEL, so that can be used to control the PHY IC standby mode. All interrupt pins are active low.

CLKO pin from the MCP2518FD IC is routed to the PWM pin of the mikroBUS™. This pin can be used to provide the clock output for the host MCU. Before it is used, it has to be configured via the SFR registers. It is derived from the input clock, generated by the onboard chip oscillator. The onboard SMD jumper allows frequency selection between 20MHz and 40MHz.

This IC can be interfaced directly to the MCU pins. To provide support for both the 3.3V and 5V operating MCUs, the Click board™ is provided with the onboard SMD jumper. This jumper determines only the logic voltage level and it is routed to both the VCC pin of the MCP2518FD IC and the VIO pin of the ATA6563. However, for proper operation of the Click board™, both 3.3V and 5V rails from the mikroBUS™ are used.

The MCP2518D Click Board™ comes equipped with the standard DB-9 connector, making the interfacing with the CAN bus simple and effortless.

We provide a library for the MCP2518D Click Board™ on our LibStock page, as well as a demo application (example), developed using MikroElektronika compilers. The demo can run on all the main MikroElektronika development boards.

The MCP2518D Click Board™ is supported with mikroSDK - MikroElektronika Software Development Kit. To ensure proper operation of mikroSDK compliant click board demo applications, mikroSDK should be downloaded from the LibStock and installed for the compiler you are using.