The DIGI POT 6 Click Board™ features the MCP41HVX1 family of devices which have dual power rails (analogue and digital). The analogue power rail allows the high voltage on the resistor network terminal pins. The analogue voltage range is determined by the V+ and V- voltages. The maximum analogue voltage is +36V, while the operating analogue output minimum specifications are specified from either 10V or 20V. As the analogue supply voltage becomes smaller, the analogue switch resistances increase, which affects certain performance specifications. The system can be implemented as dual-rail (±18V) relative to the digital logic ground (DGND). The device also has a Write Latch (WLAT) function, which will inhibit the volatile wiper register from being updated (latched) with the received data until the Write Latch (WLAT) pin is low. This allows the application to specify a condition where the volatile wiper register is updated (such as zero-crossing).

DIGI POT 6 Click is supported by a mikroSDK compliant library, which includes functions that simplify software development. This Click board™ comes as a fully tested product, ready to be used on a system equipped with the mikroBUS™ socket.

The DIGI POT 6 Click Board™ uses the MCP41HV51 IC, 7/8-bit single, +36V (±18V) digital POT with SPI serial interface and volatile memory from Microchip Technology. DIGI POT is a digitally controlled device that can be used to adjust voltage or current and offers the same analog functions as a mechanical potentiometer or rheostat. This allows an automatic calibration process that is more accurate and faster, with smaller voltage glitches. DIGI POTs are often used for digital trimming and calibration of analog signals and are typically controlled by digital protocols, such as I2C or SPI (in this case SPI serial interface) as well as more basic up/down and push-button protocols. 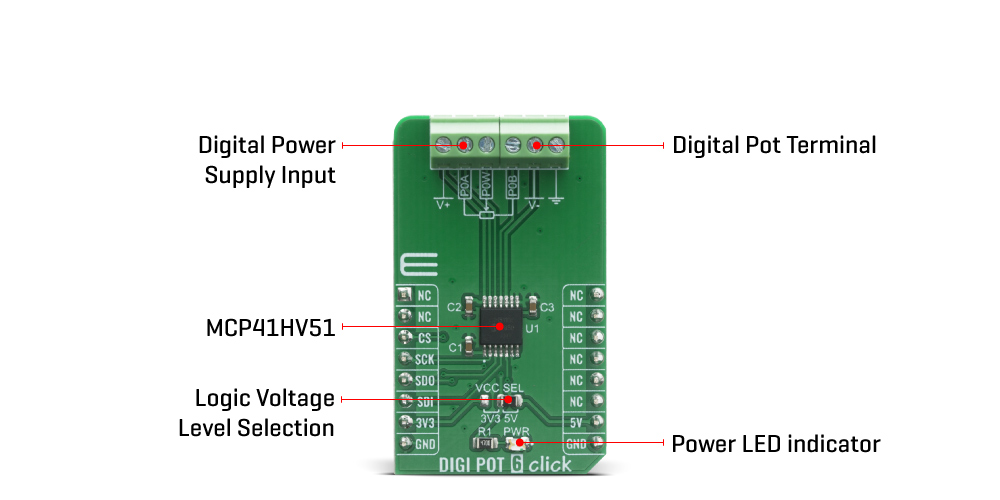 This digital potentiometer IC, MCP41HV51, allows DIGI POT 6 Click to have a wide operating voltage range, high-voltage analog support from 10V to 36V (+36V terminal voltage range while DGND = V- , and ±18V terminal voltage range while DGND = V- + 18V) and digital voltage support from 2.7V to 5.5V. It possesses single resistor network with the 7-bit and 8-bit resistor network resolution, RAB resistance options from 5kΩ to 100kΩ (5kΩ, 10kΩ, 50kΩ, and 100kΩ), and also comes with high terminal/wiper current support. Another feature of this IC is his low wiper resistance (typical 75Ω) and Zero-Scale to Full-Scale wiper operation. It uses SPI serial interface with clock frequency to 10MHz and modes 0, 0 and 1, 1 and has extended temperature range from -40°C to +125°C. Resistor Network Terminal has the possibility to be disconnected via Shutdown pin (SHDN) and (TCON) Terminal Control register. Another pin such as Write Latch (WLAT) can be used to control update of volatile wiper register such as zero crossing.

DIGI POT 6 Click is a 3-terminal device (terminals A, B, and W), with an internal architecture that is comprised of an array of resistances and switches. Each DIGI POT consists of passive resistors in series between terminals A and B. The Wiper terminal, W, is digitally programmable to access any of the 2n tap points on the resistor string. The resistance between terminals A and B, RAB, is commonly called the “end-to-end” resistance, whose values of end-to-end resistor options spanning from 1 kΩ to 1 MΩ (in this case as it’s specified at the beginning is from 5kΩ to 100kΩ). The resistance between terminals A and W, RAW, and the resistance between terminals B and W, RWB, are complementary. That is, if RAW increases, then RWB will decrease in the same proportion. There is no restriction on the voltage polarity applied to terminals A, B, or W. Voltage across the terminals A to B, W to A, and W to B can be at either polarity— the only requirement is to ensure that the signal does not exceed the power supply rails. Similarly, there is no limitation in the current flow direction; the only restriction is that the maximum current does not exceed the current density specification, typically on the order of a few mA.

The resistor network has either 7-bit or 8-bit resolution where each resistor network allows Zero-Scale to Full-Scale connections. Network is made up of several parts such as : - Resistor Ladder Module – series of equal value Step resistors RS (resistance from one tap setting to the next; this value will be dependent on the RAB value that has been selected) and the Full-Scale RFS and Zero-Scalle RZS resistance (these resistors are included in the block diagram to help better model device operation. Resistances are artifacts of the RAB resistor network implementation. In the ideal model, the RFS and RZS resistances would be 0Ω). - Wiper - The wiper terminal is connected to an analog switch MUX, where one side of all analog switches are connected together via the W terminal. The other side of each analog switch is connected to one of the taps of the RAB resistor string. - Shutdown Control – which is used to minimize the device’s current consumption via two methods such as hardware shutdown pin (SHDN) and terminal control register (TCON).

This Click Board™ support the SPI serial protocol. This SPI operates in the Slave mode which means that does not generate the serial clock. The devices SPI command format operates on multiples of eight bits. In the SPI interface, the master output pin is connected to the slave input pin, and the master input pin is connected to the slave output pin. The MCP41HV51 SPI module supports two (of the four) standard SPI modes. These are Mode 0,0 and 1,1. The SPI mode is determined by the state of the SCK Serial Clock pin on the mikroBUS™ (VIH or VIL) when the CS Chip Select pin on the mikroBUS™ transitions from inactive (VIH) to active (VIL). SPI inteface in this case does NOT support daisy chaining.

This table shows how the pinout on DIGI POT 6 click corresponds to the pinout on the mikroBUS™ socket (the latter shown in the two middle columns).

We provide a library for the DIGI POT 6 Click on our LibStock page, as well as a demo application (example), developed using MikroElektronika compilers. The demo can run on all the main MikroElektronika development boards.

This Click board™ is supported with mikroSDK - MikroElektronika Software Development Kit. To ensure proper operation of mikroSDK compliant Click board™ demo applications, mikroSDK should be downloaded from the LibStock and installed for the compiler you are using.

What's Included?
Use left/right arrows to navigate the slideshow or swipe left/right if using a mobile device